The Eros of the Greek, the Cupid of the Romans is known as Kama Deva in Hinduism. 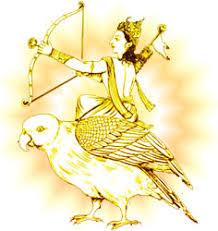 Kama Deva is represented as a handsome, winged young man who wields a bow and arrow..  His lethal weapon of love is a bow made of sugarcane with a string of honeybees and the arrows are adorned with five kind of fragrance to incite every sense- the Asoka tree flowers, the lotus, the blue lily, the jasmine and the mango flowers. The Asoka tree flowers represent fertility and the lotus represents purity in life and the blue lily represents peace and tranquility, the jasmine induces the heightened sensitivity related to seduction and the mango flowers prosperity and fulfillment.

He churns the mind as he enters it and so, as the one who distracts, he is also known as Manmatha. Catching you unawares unseen, he is the same one who showers floral arrows and so is called Kushumesu. For the pain he causes he is referred to as Mara or the one who wounds. But there is sweetness in that pain. He’s also called Madana  the one who intoxicates.

According to a legend, Goddess Sati, the daughter of Daksha Prajapati, one of the first sons of Lord Brahma, married Lord Shiva against the wishes of her father. Thus, Daksha did not invite her and her husband to a grand Yagna ( fire sacrifice ) arranged by him.

When Sati came to know about the event in her father’s house, she thought it to be a slip of mind, and proceeded to participate in the event, despite the warnings of her husband. But once she reached there, she realized her fault and was infuriated by the insult of her husband. As a penance for her disobedience, she entered the fire. When Lord Shiva came to know of her sudden demise, he was furious. Even after he controlled his anger, he started a severe meditation and renounced all work.

The world’s balance soon crumbled in his absence, and Sati took rebirth as Goddess Parvati to try and win Lord Shiva’s heart and wake him up from his trance. She tried all ways to get the attention of Shiva. When she had exhausted all her feminine ways, she invoked the help of Kamadava, the Hindu cupid-god, who agreed to help her in the cause of the world, despite the risks involved. He shot his love-arrow on Shiva’s heart. Disturbed in his trance, Lord Shiva opened his third eye, the gaze of which was so powerful – that Kamadeva’s body was reduced to ashes.

Now, with KamaDeva’s destruction, the world became barren and infertile, for he had been the God of desire and love. Shiva and Parvati went on to get married. But when Parvati, and the other Gods, including Rati, KamDeva’s wife pleaded with Shiva to resurrect Kamadeva, Shiva relented. He brought KamaDeva to ‘life,’ thereby restoring the fertile cycles of nature. However, KamaDeva was resurrected purely as a mental image, so that he represented the emotional and mental state of love, rather than pure physical lust. It is said – that it was on the day of Holi that Kama Deva had sacrificed himself for the good of all beings. It is believed that among the many different legends around Holi, the festival of colors, and the traditional bonfire that is lit on that day, also  commemorates the Kama Deva legend. So, many people also worship Kama Deva on Holi, with the simple offering of a mixture of mango blossoms and sandalwood paste, to cool off the pain of his fatal burns. Songs are also sung in which Rati’s sorrow is depicted. He is believed to be forever traveling the three worlds accompanied by his wife Rati. Rati is the perfect match for Kama Deva. In beauty she is unparalleled.

Kama Deva and Rati bring with them the cuckoo, the humming bee, spring and a gentle breeze. So when you go out into the garden and   hear the cuckoo calling out to you, you know it is KamaDeva visiting. A tree is often planted near Hindu temples as a symbol of love and as a tribute to Lord KamaDeva

‘ As the god of love, and in his close traditional relation to the ascetic Lord Shiva, KamaDeva speaks to the ability of the supreme divinity to absorb aspects of both asceticism and eroticism. While Shiva is proof of the power of asceticism, the bland and desolate world which resulted from his impetuous incineration of Kama is tantamount proof of the poignant necessity of love and desire.’

Vibhuti (sacred ash)  is often used by Hindus symbolising victory over desires as it refers to Lord Shivas victorious battle with the god KamaDeva, the god of desire, Siva had reduced his KamaDeva’s body to ashes and smeared his own body with those ashes, so then it was a victory over desire. But, as we all know, Kamadeva, like Phoenix, rose from his own ashes and is very much alive and active within each one of us, where he is known as the kama rupa, or body of desire

How A Sikh Defines ‘Hindutva’

Book : ‘A Hindu’s Guide to Advocacy and Activism’ By Sean Bradrick

India And Slavs- Part 3 : The History Of Genocide And Heroic Resistance

Posted On November 9, 2022 | No Comments on India And Slavs- Part 3 : The History Of Genocide And Heroic Resistance

In the previous two essays, we have shown many Hindu-Slavic religious connections and presented more-or-less convincing evidence on, firstly and foremostly, Hindu-Iranian ancestry of the Slavs and the Slavic pre-Christian religion. We have used various [...]

August 15, 2022 | No Comments on Earth Goddess’ Statue ‘An offence to God’ Say, followers Of A Middle Eastern Religion Known As Christianity

May 26, 2022 | No Comments on United Nations Must Recognise the Human Rights of Dharma Traditions: Hinduphobia, Anti-Buddhist, -Jain and -Sikh sentiment

The Hindu Concept of Time : Part One

Posted On September 7, 2017 | No Comments on The Hindu Concept of Time : Part One

In general, the Eastern understanding of time is very subtle, and perhaps is only matched by some of the most recent theories of modern science. That time is relative, is well recognized, and the fact [...]

Are we living inside a cosmic computer game? Elon Musk echoes the Bhagwad Gita

October 6, 2016 | No Comments on Are we living inside a cosmic computer game? Elon Musk echoes the Bhagwad Gita

Ten Dharmic Steps to making the Lockdown work in your favor

Posted On May 18, 2020 | No Comments on Ten Dharmic Steps to making the Lockdown work in your favor

If you’re living in any one of the major countries in this world and reading this article, chances are that you’re living under a lockdown of some sorts. While the definition of a lockdown may [...]

The Symbolism of the Churning of the Ocean

September 2, 2015 | No Comments on The Symbolism of the Churning of the Ocean

March 30, 2015 | No Comments on Emptying the Sea to fulfill One’s Divine Task

Divinity lies within us all

The Siamese Twins of Atheism and Christianity

Posted On January 18, 2014 | 1 Comment on The Siamese Twins of Atheism and Christianity

While atheism and Christianity may seem at polar opposites in mainstream discourse, the reality is that they are actually singing from the same hymn sheet when it comes to Hindus. The denigration of Hindu civilisation [...]

The Genius of the Hindu Mind: From Zero to Mars

Posted On July 7, 2021 | No Comments on Three-eyed calf from Wales rehomed in Leicester animal sanctuary and named after Hindu god

A three-eyed calf has been rehomed in Leicester and renamed after a Hindu god after an animal sanctuary bought the animal, believed to be ‘special’, from a Welsh farmer. The unusual-looking calf made headlines in [...]

Kashmir : Terrorist Violence and the War on Life

Posted On July 7, 2021 | No Comments on Three-eyed calf from Wales rehomed in Leicester animal sanctuary and named after Hindu god

A three-eyed calf has been rehomed in Leicester and renamed after a Hindu god after an animal sanctuary bought the animal, believed to be ‘special’, from a Welsh farmer. The unusual-looking calf made headlines in [...]

Video : Wedding Held in a Animal Sanctuary To Feed Animals

June 5, 2021 | No Comments on Video : Wedding Held in a Animal Sanctuary To Feed Animals
HHR News